Puerto Rican culture is a mixture of Spanish, African, and Caribbean Indians (called Taino) traditions that have been significantly influenced by U.S. culture. Puerto Ricans will specify that they are “Puerto Rican” or “Boricuas,” and their homeland is Puerto Rico, not the United States (although they are a U.S. territory). For most of them, “my country” does not mean the United States, but its own island, and the word “Creole” usually means “all that is”: music, cuisine, language, art, people, religion, and other aspects.

While you could certainly spend months exploring every nook and cranny of this archipelago, Puerto Rico is so small that it’s also a great place for travelers with limited vacation time. During a weeklong road trip, you can explore historic cities, caves, mountains, rain forests, coffee plantations, salt flats, and lots and lots of beaches. The terrain is astoundingly varied for such a small land mass.

Traditional Puerto Rican food is referred to as “cocina criolla,” and most of it is very meat heavy but vegan options can be found nearly everywhere. In coastal towns people eat a variety of seafood such as crab, octopus and lobster. A surprising amount of local cuisine is vegan friendly, however, with just a few simple modifications you need to request to make sure it’s veganized.

~ Thanks to Cristen Andrews for providing such delicious content 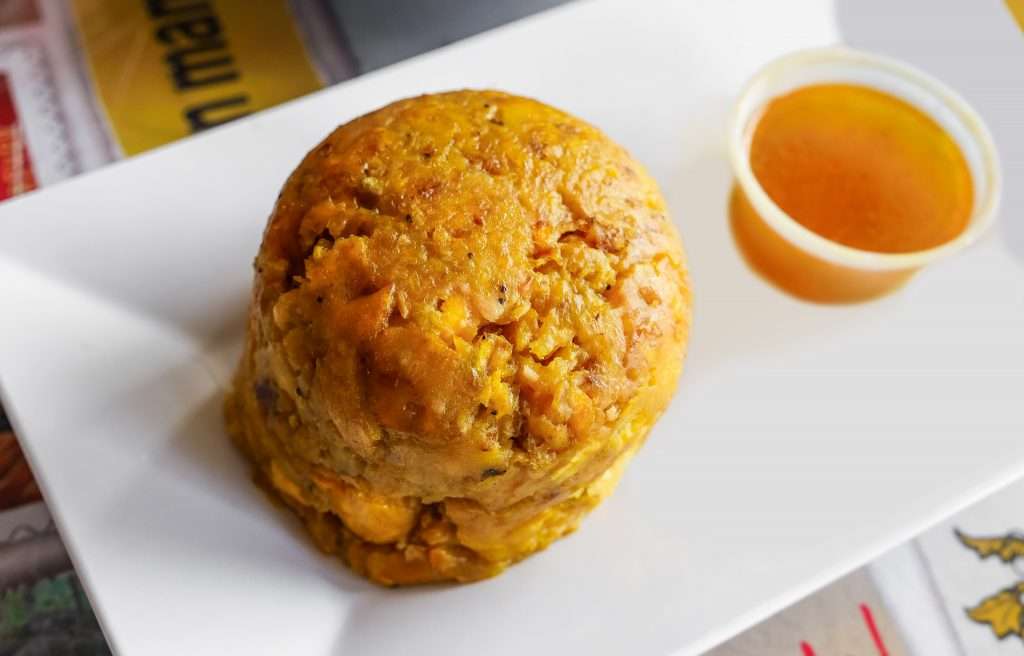 When vegan, Mofongo is a dense, filling dish that involves plaintains that have been deep fried, mashed with lots of garlic, and then formed into a ball. Mofongo is most commonly made with plantains, but other starchy root vegetables like yuca and pana, called mofogo de yuca, or mofongo de pana. Ask if they fry in pork fat.

Like almost every dish prepared in Puerto Rico, you’ll have to ensure it is vegan by checking to see if it was cooked with pork or bits of bacon (as this is quite common in classic mofongo).

Tostones are green plantains that are cut width-wise and deep fried, then smashed into flat rounds and deep friend again. The end result is crisp, golden brown medallions that are salted and eaten like french fries. The best ones (in my opinion) are either pre-soaked in garlic water or prepared with minced garlic. 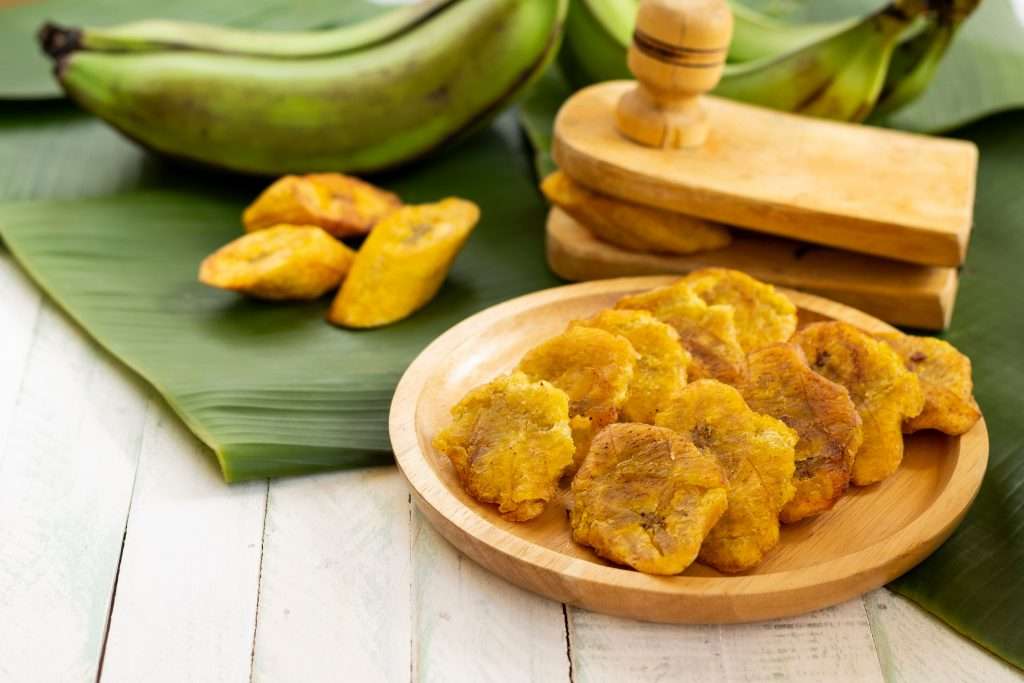 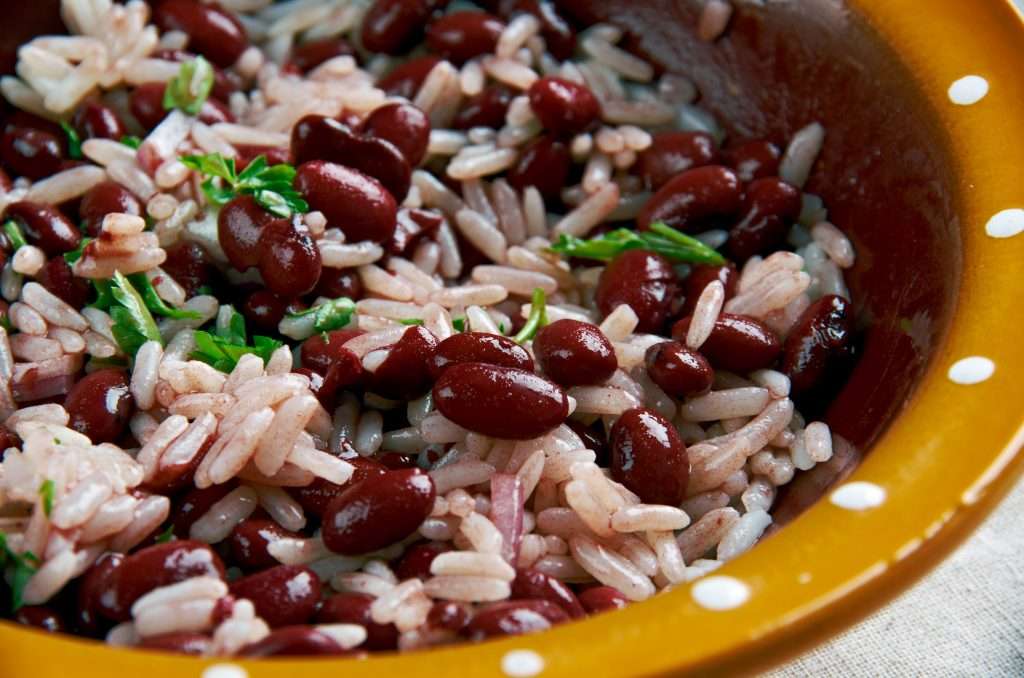 Just like almost anywhere in the Caribbean and Latin America, good ‘ol rice and beans is very popular in Puerto Rico. Frijoles is the Spanish word for beans in much of Latin America, but the Puerto Rican word for beans is habichuelas.
Habichuelas are often served as a stew with potatoes, squash, peppers, and other veggies, though ham is often used as well so always be sure to check. The habichuelas most often found at restaurants and street stalls are red kidney beans, but habichuelas blancas (white beans), habichuelas rosadas (pink beans), and habichuelas tiernas/habichuelas verdes (green beans) are also common, as are chick peas. Habichuelas are thickened with Calabash a local pumpkin cooked with the beans when stewed.

Puerto Rico’s national dish is arroz con gandules (rice with pigeon peas). This dish is often seasoned with sofrito (an aromatic salsa-type sauce) and diced ham. While it’s possible to find vegetarian rice and beans, you’ll probably have the easiest time at restaurants that cater to tourists. If you’re polite and willing to speak Spanish, however, it is possible to custom order vegetarian items at most places. Most Puerto Ricans we met were very friendly and they tried their best to be accommodating.

Viandas (or starchy tropical tubers) are an important staple in the Caribbean. There are many types with varied tastes and textures, and they are prepared in many different ways.

Some common root vegetables in Puerto Rico are yuca (cassava), batata (white or yellow sweet potato), ñame (yam), yautia, malanga, taro, and apio. Pana (breadfruit) and chayote squash is quite common, as are many types of potatoes and plantains. Here is a good guide for information about common tropical roots and preparation instructions. 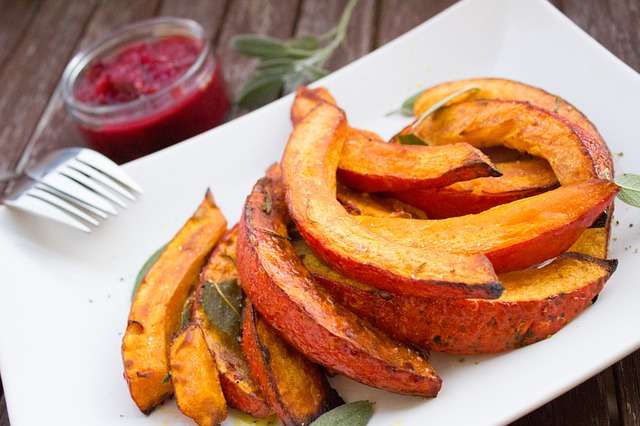 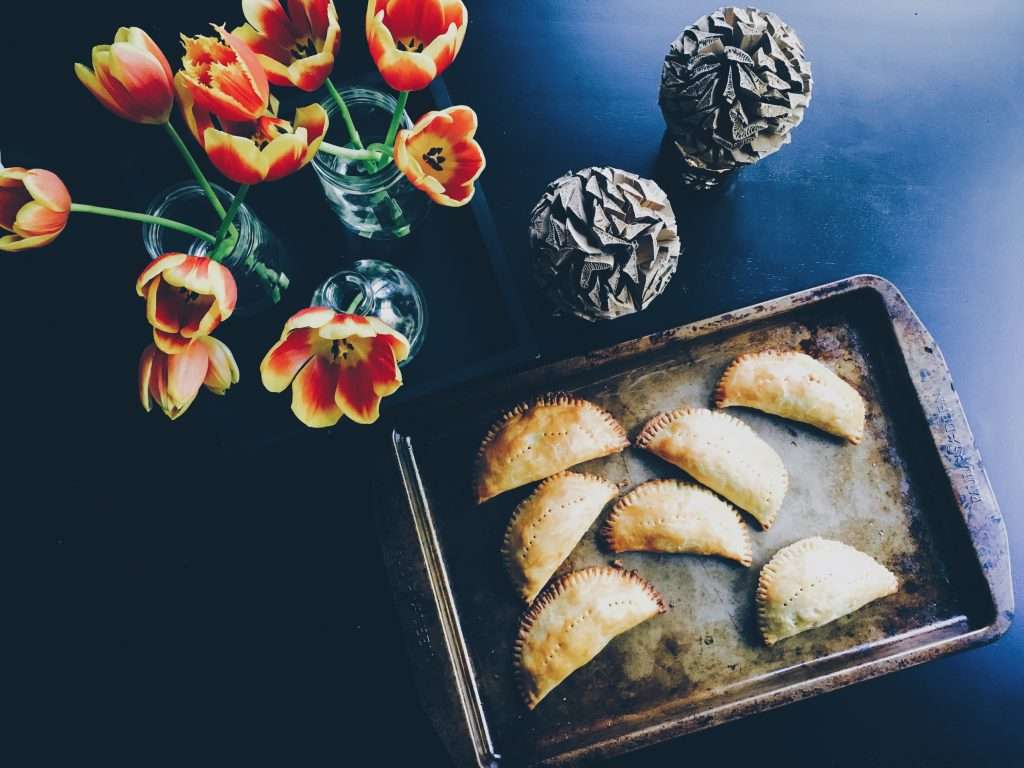 Deep fried pastry turnovers are popular at small restaurants and street stalls. Many are stuffed with assorted meats or seafoods, but it is also possible to find some stuffed with fruits and vegetables. These turnovers are called empanadillas, but are commonly refered to as pastelillos on the eastern side of the island. If the empanadillas are being made on the spot and if you ask nicely, it is generally possible to custom order them with whatever ingredients are on hand (guava, broccoli, cauliflower, etc.) 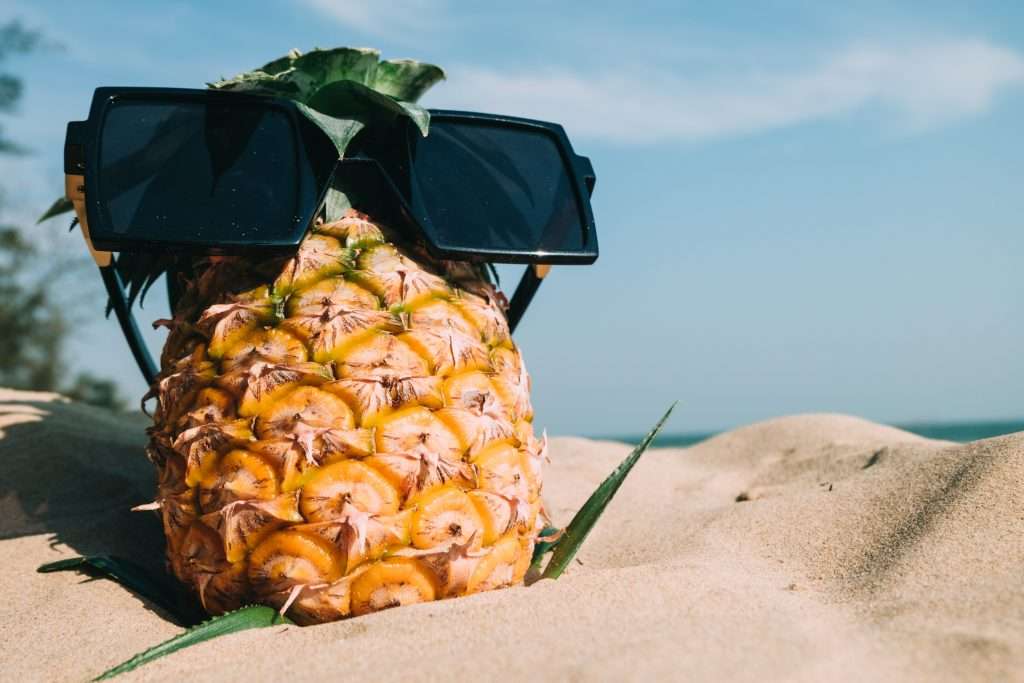 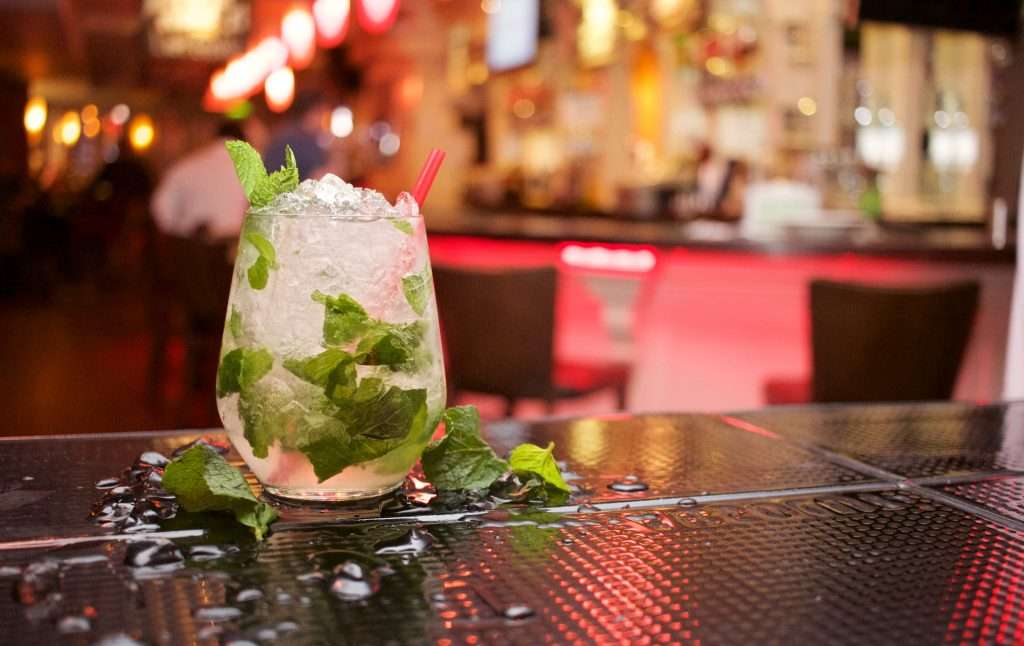 Rum is the national drink and you can find rum here in every shade and flavor. It’s great in a cuba libre (rum and coke), piña colada, mojito, or other specialty cocktail. Chichaito is a shot consisting of white rum mixed with anise liqeur. For those more into beer, the local brews are Magna and Medalla. 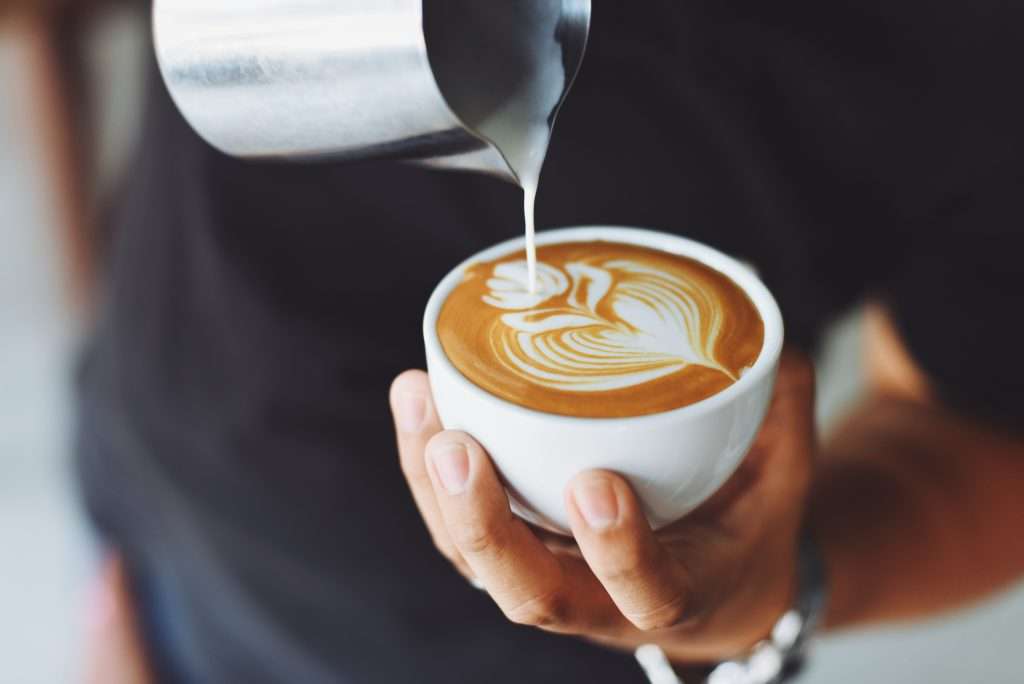 Tips for Being a Happy & Healthy Vegan in Puerto Rico

Learn some Spanish. Even though English is widely spoken in the tourist areas, Spanish is the local language and even just knowing a handful of words and phrases will be  a tremendous asset (especially if traveling outside of the Old San Juan area and attempting to customize meals). Trying to speak Spanish is also a good way to show respect, so any attempt to speak it (no matter how poorly) will be greatly appreciated. Vegano hablado aqui! 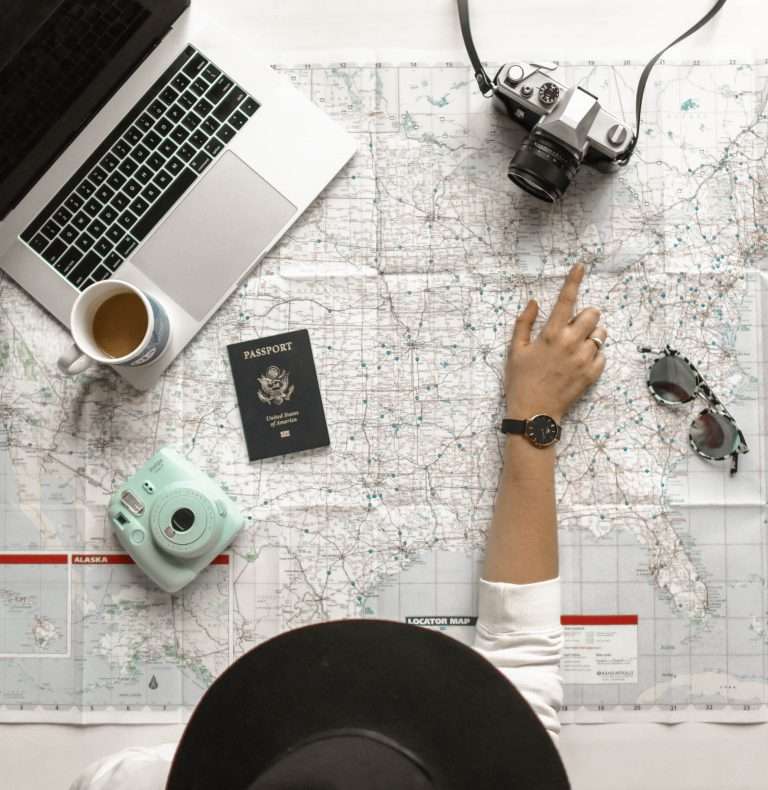 Plan ahead. Puerto Rico has several restaurants that specifically cater to vegans and vegetarians. While we wouldn’t recommend planning your trip around them, knowing where you are in relation to them is a good idea. It would be a shame to miss them if you happen to be nearby. Visit Happy Cow for a list of veg-friendly Puerto Rican restaurants and health food stores. If traveling with a smartphone, you can also download the Happy Cow app or Plant Eaters app to discover some veg-friendly places nearest to you.

Eat at small, local places and custom order. While small town eateries are not likely to be the most vegan friendly places, these types of places may just end up serving you the best meal of your trip if you give them a try. The food served at tourist restaurants in Old San Juan is very pricey, typically more bland, and you miss out on a lot of the local flavor when eating at places like this. At a lot of these smaller places, you can speak directly to the chef (this is where your Spanish comes in) and inquire about the possibility of custom ordering a vegetarian meal. From our experience, many places have at least a few vegetables in the kitchen and are very willing to do so. If you happen across the right place and are willing to speak up, chances are you’ll be very pleased with the result.

Rent a car if traveling outside of San Juan. Buses and taxis are easy to come by in San Juan, but public transportation otherwise is not so great. Having a car ensures you a great amount of freedom. You can visit certain vegetarian restaurants that would otherwise be difficult to reach or drive to specialty markets and grocery stores, stock up on a few basic food items, and just store everything in your car.

Bring a travel stove and self cater. If possible and desirable, camping is a great way to see the island. This will enable you to try more local foods and pick up interesting, raw ingredients from the grocery store to prepare your own vegan meals with. Many of these items would likely not have been made vegan if ordered at a restaurant and prepared in the classic Puerto Rican method, but in making your own vegan Puerto Rican fusion meals you can practice expanding your horizons.

A more extensive list of vegan-friendly restaurants & health food stores in Puerto Rico can be found on the Happy Cow Website or app.
Check back often as we will be providing new stories and content regarding vegan dishes and restaurants that we discover on the island.